“I’d like a helping of the flu with a side of bronchitis, please.” Said no one. Ever.

Although I didn’t want it, I still managed to get stuck with it. Ten days later, I’m back to 90%. I haven’t done much of late as the sickness sucked the energy right out of me. The one thing I did do to pass the time: read.

What did I read? Well, I re-read the first four books in the Chicagoland Vampires series by Chloe Neill. I’d forgotten how much of an arrogant pain Ethan was early on. A healthy dose of Merit snark helped my mood. Plus, how can you not love some Mallory and Catcher?

Deciding I was in the mood for more vampires, I re-read some of the Black Dagger Brotherhood by J.R. Ward. Dark Lover, the initial book that was Beth and Wrath’s story, is one of my all time favorites. Of course, I had to delve into that one again. I’d recently finished re-reading Rhage’s book so I skipped his went straight to Butch’s. After finishing Butch and Marissa’s story, I moved to Manny and Payne’s. Theirs is one of the books I haven’t read over and over. Not sure why as I liked their story a lot, especially when the figured out Manny’s bloodline. I think I might have been tired of the V drama (I had forgotten about that in this book), which is why it isn’t one of my top favorites. Last but not least, I re-read Blood Fury because I just love me some Saxton. He waited a while for his HEA, and I’m so glad that he got it.

If you’re not familiar with Blood Fury, it’s part of the BDB Legacy series. The main couple in the book are Peyton and Novo. Here’s the blurb:

A vampire aristocrat, Peyton is well aware of his duty to his bloodline: mate with an appropriate female of his class and carry on his family’s traditions. And he thoug 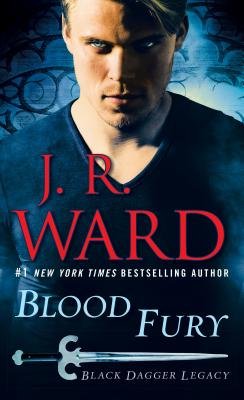 ht he’d found his perfect match—until she fell in love with someone else. Yet when his split-second decision in a battle with the enemy endangers the life of another trainee, Peyton has to face the idea that his future, and his heart, actually lie with another.

Novo, as a female in the Black Dagger Brotherhood’s training program, feels like she has to prove herself to everybody—and she has no interest in being distracted by falling in love. But when Peyton proves to be so much more than a rich playboy, she is forced to confront the tragedy that has broken her soul and closed her off from love.

As the two grapple with Novo’s past and Peyton’s present, another couple must contend with a connection that is unparalleled—and potentially scandalous. Saxton, who has had his heart broken, discovers in himself a deep-seated attraction to Ruhn, a new member of the household. But will the other male explore the connection? Or will he close his mind and his heart to what could be true love . . . and cost Saxton everything?

With any luck, as my energy comes back, I will get back to writing and exercising. I’m already thinking about upcoming day trips and vacations. I’ve got to get back to Iceland!! But, that’s another story…

Coffee & Travel. Knitting & Reading. Taking a break from writing. Hiker and Cyclist (sort-of, getting back to it!). Too many hobbies for my own good! View all posts by Denise Wyant